This post is probably more for me than anyone else, its a list I will add to from time to time of things I miss from New Zealand and things I know I will miss when I leave Norway.

Of course I miss and will miss about both places is people, they are the only important thing in life, but this is other than people.

Here is a list of the things that I miss from New Zealand and the things I think I am gonna miss when I am away from Norway:

Then there are the things I think I am gonna miss (savner) when I am away from Norway:

The sooner they make a teleport device the better, then I need miss nothing, but then would I appreciate it as much?

Today (17 May) is Norway’s national day, and they celebrate it in style.

In fact one guy in one of my Norwegian classes when asked to write on his national day wrote that he would not as it was not anything compared to Norway’s so he wrote of his first 17th May in Norway.

People are in their regional traditional costumes, parades and great gatherings of people happen all over, pÃ¸lse (sausage), brus (fizzy drink) and iskrem (ice cream) are the foods of the day.

Why is this such a big day for Norway? To know this you need to know a little of Norway’s history.

History in a glimpse

Norway was under Danish rule including the Danish King for 400 years.

Norway wanted to have more say in what happened in Norway. A change of power due to world events saw Norway taken from Denmark and put in union with Sweden.

This was a big day and is considered as the restart of Norway as an individual nation.

Celebration of 17 May started small but has evolved into some pretty full on traditions.

In Oslo there is a parade past the palace and the royal family gets dressed in traditional clothing and goes to the palace to stand on the balcony and wave to everyone in the parade.

Everyone in the parade is a lot of people. It is the usual brass bands but also every school dresses in traditional clothes and walks past the palace. Afterwards, as I understand it, they go back to their school and have a party with pÃ¸lse and ice creams.

The tradition is pretty much the same in other cities except there is no royal family or castle. There is a parade through the town and parties at the schools.

Russ (people finished with High School) are in the parades as are some football clubs etc.

You can buy 17 May medals to wear with you clothes on the day.

A consumer program (Hjelper Deg) did a spot last week on the best ice creams for the day based on taste test by kids, value for money etc.

I have been noticing people tidying up round their houses and thought it was just a spring clean thing but my boyfriend says it was to be spic and span for 17th May.

Lots of houses in Norway (compared to New Zealand) have flag poles. Normally these fly the pennant Norwegian flag but today as a special day they fly the rectangular Norwegian flag and those houses without flagpoles have flags displayed on the front porches of their homes.

At Christmas there was a tower Â´cakeÂ´with Norwegian flags attached to various layers of the cake and I was expecting to see that return now, but that is not a traditional food for 17 May I am told.

This is my first 17 May in Norway, so I am sure I have lots to learn yet. If you have more info on any of traditions or corrections to my first impressions please leave me a note.

One year soon I want to go down to the parade and experience the crush of people and the costumes and food for myself. Got to do that at least once.

In the meantime I will have to make do with tv news, weather and other presenters being dressed in national costume and the flags flying in the street.

To give you some idea of the day, here are some photos from round the net, clicking ont he photo will take you to the place I grabbed the photo from.

In my travels round the net I found this cute game where you can dress a woman inÂ bunad (traditional dress). Your meant to match items so her clothes are all from one region, which I did not manage too well though most I got first time through was three sets of two items from same places. Obviously I have a bit to learn about bunad.

Saturday I arrived in Norway, after too many hours in flight. traveled from 4pm Friday NZ time till 12.30 am Sunday NZ time, so arrived 2.30 pm Saturday Norwegian time.

Took homeopathic pills on journey called No-more-jet-lag. Think they are brilliant as do not feel half as bad as I should.

Was almost sureal to see Jarle after all this time. Was only May since I last saw him but felt like a year had passed. Was very good to be able to hug him again. Norway turned on a spectacularly fine day for my arrival. Hot day after coming out of early spring in NZ.

The landlords put out a collection of wee Norwegian flags on their verandah Â to welcome me. I have not met them yet but that was sweet.

I managed to stay up till bed time day one so that will help me settle into the time zone, but I woke up at 5am the next day unable to go back to sleep, so still catching up sleep here. Monday slept till 7am so things are settling.

Sunday went to the sculpture park in Oslo, seen photos of it before so it was good to actually be there. Very pretty expansive grounds. Can picture great picnics being held here. 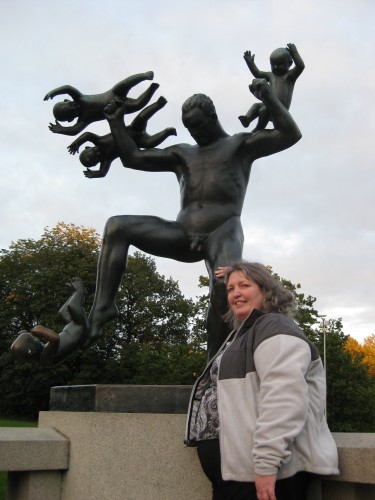 Sunday, also met JarleÂ´s family and they were very welcoming. His parents are self confessed cat people and spoil their cats. They served apple cake, yum my favourite, and homemade cherry juice, unsweetened, nice and tart, yum.

Strangest things I have seen so far,

– water feature, spurting up a circle of water in the middle of a road where trams drive over. Handy for washing underside of trams I suppose and quite pretty, but strange.

– people driving on wrong side of road, going round roundabouts the wrong way and yielding to the wrong side, LOL

– Street signs so old and worn you almost canÂ´t read the street name.

. Berries, berries are my favourite fresh fruit and they grow in abundance here.

I really think I am going to like it here.

A kiwi's view on the world.