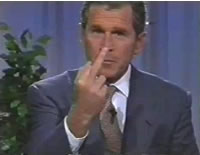 Kinda says it all to me.

Link to the video. (Yeah, its not a fake)

7 replies on “One finger victory salute from Bush”

This happens to be from Bush’s time as Governor of Texas.

It’s about the man! Not the office!

We’ve got an adolescent full of testosterone and Bullshit running the country. And he has nuclear weapons and the most powerful army of earth to play around with.

As P. J. O’Rourke wrote “Giving money & power to the government is like giving whiskey & car keys to

So apparently, the leader of the free world is bound to be serious all the time? You’re a fool. First of all, this is footage from when he was Governor, not that it matters one wit anyhow.

Jarle, you crack me up… the liberals idolize a man who quite literally (documented fact) spent more total minutes diddling his intern in the oval office than he did in all of his meetings with Richard Clarke, his beloved “terror czar”.

This man also indignantly lied to the American people (And this was a real lie, not the Iraq war reclassification of “poor intel” to “lie”, as the liberals would have you believe.), and is still the treasure of the Democratic party, even after impeachment. Incredible.

People have moments of levity, get over it…

“The leader of the free world”. Come on, give us a break. Only republicans believe that horseshit.

And get over Clinton will you, I realise he broke up the reign of the Republican party, and you guys wasn’t able to get rid of him, but its more than 4 years ago now. Give it a rest.

4 years ago is still within the statute of limitations for whinining about political events. otherwise we would stop hearing about how Bush stole the last election:)